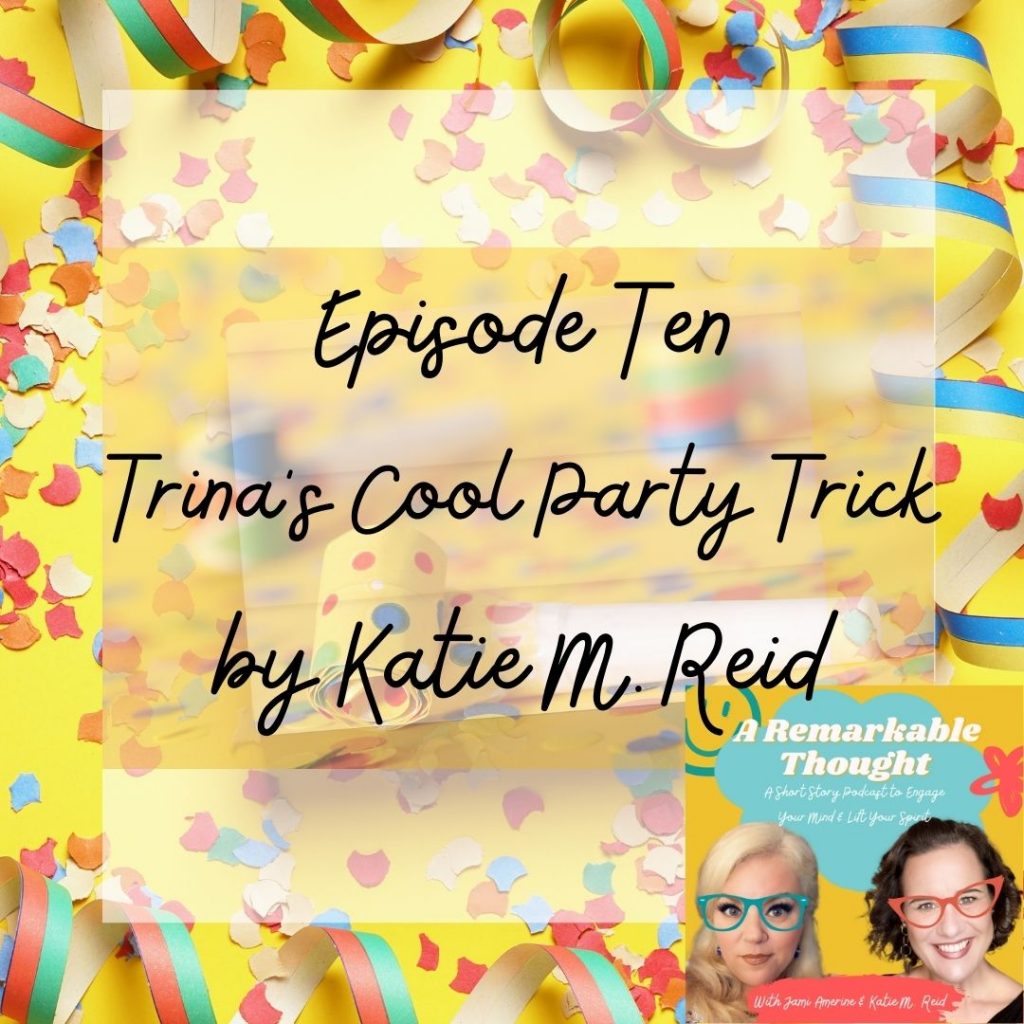 Here is the latest installment for “A Remarkable Thought”—a short story podcast to engage your mind and lift your spirit. Each episode contains a fictional story and a quality question to help you ponder what you’ve heard.

Jami Amerine and I have created this podcast as a gift for you—to take a beat and refresh your remarkable mind.

Listen or Read it or Both!

It wasn’t the sort of thing you’d put on a job resume, or something that you’d lead with after an introductory handshake, and it definitely wasn’t something you should include on your Tinder account for that matter, unless you wanted to scare away any semblance of an eligible, sane, and semi-attractive bachelor.

But it definitely came in handy from time to time, for Trina LeBeau—especially in a pinch.

In order to better understand Trina’s superpower, or rather, her cool party trick, you need to first understand a bit about Trina herself.

Raised in Savannah, GA, under Spanish moss that triggered her allergies but proved fodder for her active imagination and romantic notions, Trina was one-of-a-kind.

With wild, fiery red curls that would not be tamed in the southern humidity, by comb or will, Trina tried to hide behind her unruly locks. Her mama forbid shears come near Trina’s head, as if she’d lose her strength like Samson from those Sunday School stories at 1st Presbyterian.

Being a wallflower was one of Trina’s ambitions, if you could call it that. She was an introvert in a household of boisterous, loud talking executives. She was well loved, but often felt smothered like cream cheese and boysenberry jelly on rye.

Trina often retreated to Forsyth Park, located several blocks from her childhood home. She camouflaged herself among the art students, vagabonds, and the middle-aged ladies dressed in vintage sundresses who strolled with wicket baskets in hand, not full of fruit, baguettes, or wine, mind you, but their purebred puppies who frolicked in the lush grass carpet as they (the midlifers, not puppies) solved the world’s problems with chortles, clucks, and criticism under wide-brimmed sun hats to protect their creamy skin.

Trina fed off other people’s oddities as she nibbled on goat cheese and crusty bread, her legs tucked under her as sat upon her Grandmother’s gingham table cloth, positioned under the sweeping willow in the park. It was one of her favorite places on the planet, situated in a real-life mosaic, blending in but bearing witness to beauty and vibrant color and living, breathing art.

Trina was fifteen when she first encountered her superpower.

She was waiting in line under the scorching Georgia sun for ice cream at Savannah’s World Famous parlor, when Jimmy Ray Lancaster sped past her on his moped and hollered, “Trina LeBeau, you sure look purdy, but looks like you forgot your slip.”

Her cheeks burned crimson, as she realized that the sun was angled in just the sort of way that it must be shining right through her sage green summer frock. She shoved her hands into her pockets of her empire waisted-sundress willing more than her hands to disappear.

Trina could feel the judgment from those in the crowd, their gawking and mutters burned hotter than God’s governing ball of fire overhead. She’d never been a fan of slips much to her mother’s horror, and, at the moment, half of Savannah and a gaggle of tourists.

She couldn’t wait to step inside the ice cream parlor to relieve her internal temperature with some cool lavender ice cream on her lips.

As Jimmy Ray sped out of sight, Trina’ felt her thick curly hair, begin to rise off the back of her damp neck, she tried to hold it down but it seemed to have a mind of its own. The eerie thing was there was no wind. She watched with equal parts horror and fascination as her curls extended like a hundred antennas growing in every direction, as if there was an electrical current above her, beckoning her curls upward and outward.

Oh my stars and bars, what is happening? Thought Trina, half expecting to see an alien ship hovering overhead.

Those crowded around her in line gawked at the strange phenomenon. A small child in a smocked sundress gasped as her mother shushed her.

Before the stares continued or rapidly turned to accusations that shipped her off to Salem, Trina got out of the line for ice cream and darted around the corner to the alley. She pulled out a compact mirror from her purse. Her octopus-like hair seemed to crawl back down to its rightful, yet unruly place, as she took several deep breaths to calm her racing heart.

What was that all about?

Trina fanned herself with her french-manicured nails, hoping this was some sort of heat stroke hallucination.

Was her hair possessed? I mean it had always had a life of its own, but never had it tried to take off.

“I mean, I never. What is wrong with Marla LeBeau’s girl?”

“Did you see the wild mane? Gracious, she needs a proper haircut.”

“Mama, why was that girl’s hair flying away, while she stood still?”

“Hush, baby. Look, it’s our turn to get ice cream. Finally. I’m melting like butter in a sizzling fry pan.”

The speculative, gossipy voices were amplified as if they were spoken into a microphone, and Trina’s ears were the speakers. Already blocks from the ice cream parlor, Trina was baffled that she could still hear those in line…as if they were right next to her.

She spun around, disoriented by the strange encounter.

That was the first time Trina discovered her cool party trick, well more accurately her embarrassing electrifying party trick, that she prayed to Baby Jesus would never surface at an actual party. 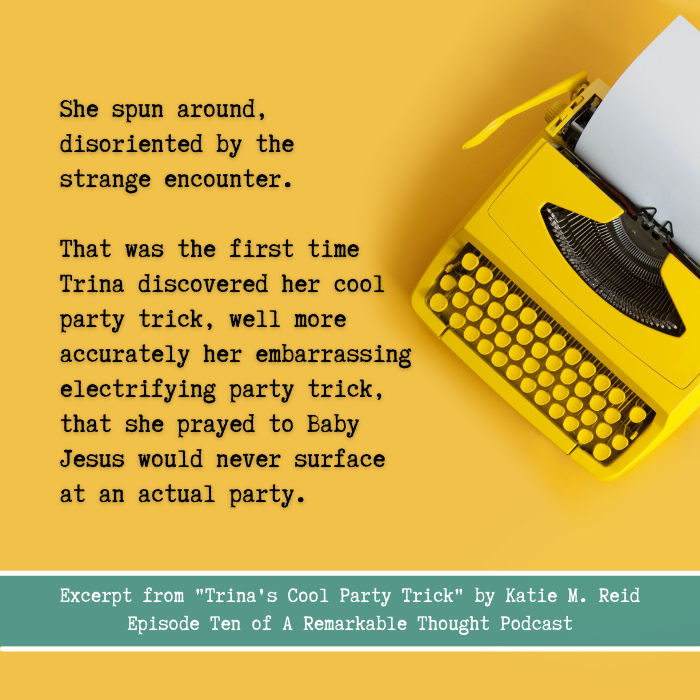 Trina quickly discovered that upon hitting puberty, at age 15, a bit of a late bloomer, she had a superpower. And it was basically Jimmy Ray Lancaster’s fault, or at least his teasing that exposed it.

Whenever Trina got embarrassed, her hair literally stood on end, growing like Medusa’s but not turning to serpents, instead her individual curls turned into mini amplifiers which enabled her to hear all sorts of things…things she would have been better off not knowing most of the time.

It did come in handy some of the time, like when Jimmy Ray kissed her a year after his drive-by teasing. He planted one on Trina under the big ole’ willow in the park. She warmed from the inside and her neck got all blotchy. She slipped behind the trunk of the tree before he noticed her mess of curls starting take flight. She ran off, grabbing her teal bike with the basket, before he could kiss her again. But she heard every word he said in his impassioned speech from a mile away.

“Trina Lebeau, I love you, ya hear. I’m gonna marry you one day!”

Trina got creative right quick in hiding her superpower as much as possible, but somehow the feds found out and paid her handsomely for spying on some of her daddy’s banking friends.

And then there was that one time that she solved a few local mysteries…one being a purebred dog snatcher who preyed on the fancy puppies of the picnic ladies in the park.

And there’s a rumor that Trina once visited her Great Aunt Lenore in France, for a cultured tour of museums and galleries, but a few of the local flavors claim she was selling secrets to the military.

Trina might have had a future in espionage, except she had a weakness, besides the creamy lavender ice cream from Savannah’s World Famous parlor. It was Jimmy Ray Lancaster, who grew up, moved to the big city for college, earned his law degree and came back to win over his first love, Miss Trina LeBeau.

It took some convincing and improvising…Trina started wearing signature wide-brimmed, well-fitted hats to try to conceal her superpower, because Jimmy Ray embarrassed her on the regular and well, when she was making out with Jimmy she didn’t need to hear what the whole town was saying right in her ear about it.

Satisfied with her past contributions to the safety of Savannah, especially the dog population and possibly a few global negotiations, Trina decided to go against Mama’s order and let Jimmy Ray’s sister, Kelly Graham, cut off her mane into a smart bob.

Poof went her party trick, bye-now went her superpower, and Trina was footloose and fancy free. She could kiss Jimmy Ray freely without looking like she just put a fork in a light socket. She’d have to rely on her man to entertain party guests with his courtroom victories, while she blended in, just like she’d always wanted to.

Today’s quality question is not do you have a cool party trick, but I mean if you do, please tell us. Once I tried to potty train my 7 month old and he went on the toilet a couple of times, but it was tiring and I don’t think Trina’s mama would approve of such talk on a podcast.

But today’s quality question is: Do you prefer to stand out or blend in? Any why?

Let us know, we might even reward you with some lavender ice cream. Slips are optional in our opinion.

We can’t wait to hear what you think!

Do us a favor and leave a review on iTunes so more people can tune in and participate in some remarkable thoughts! Stay connected with us by subscribing to the show on your podcast app and also by subscribing with your email address at changeyourmindchangeverything.org.

Just fill out the sign-up bar with your name and email address and voila, you’ll be added!

This has been “A Remarkable Thought: A Short Story Podcast to Engage Your Mind and Lift Your Spirit,” a production of changyourmindchangeeverything.org. 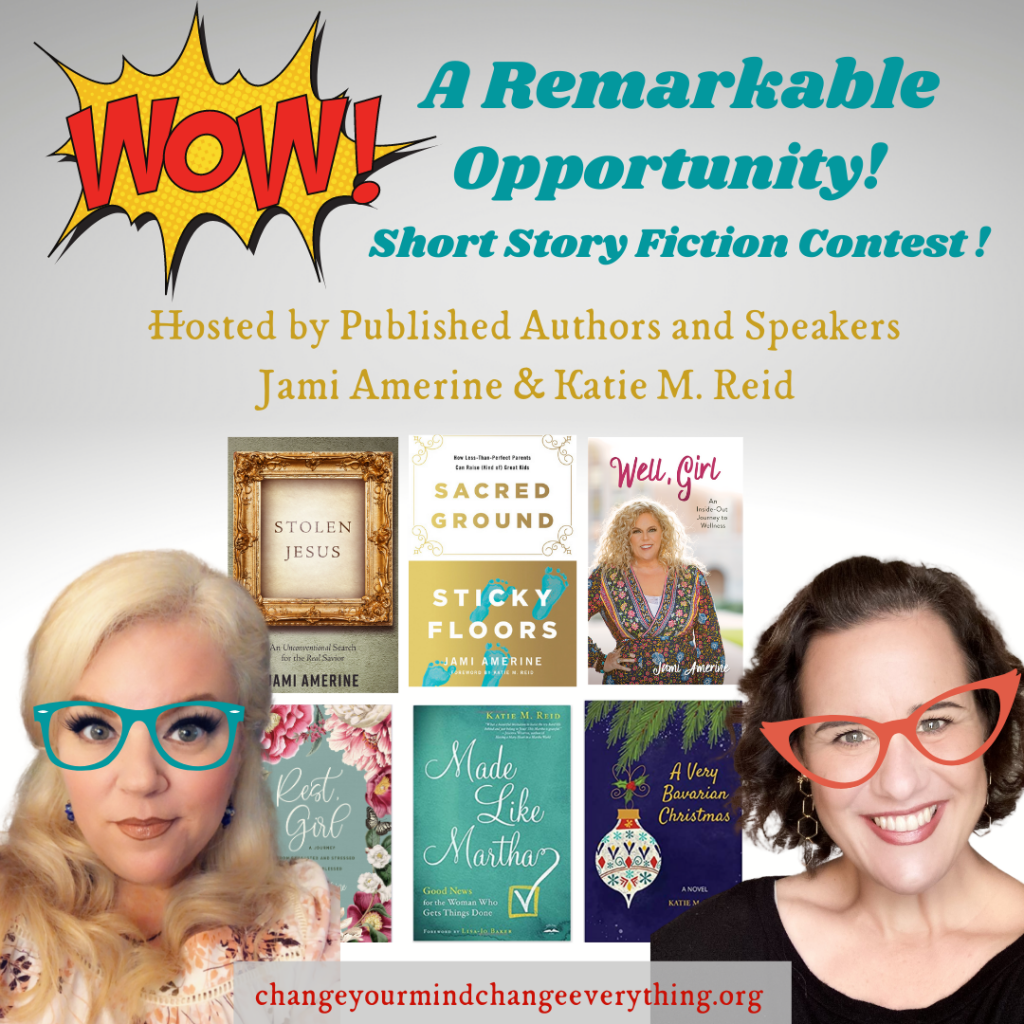 Now it’s your turn, we want to hear your story. We’ve convinced it will be remarkable.

Whether you dabble in writing fiction, dream of trying, or write with fervor, you’re invited to enter this fun fiction contest!

Get caught up on A Remarkable Thought Podcast:

Previous Post: « Singing in the Dark with Ginny Owens
Next Post: Secrets to Resting Well with Dr. Saundra Dalton-Smith »