Yesterday I began with my brother’s birth story from my mother’s
perspective.  Today I am going to tell you about the day after his
birth; after my parents had been told, in May of 1979, that their infant
son had Down Syndrome.  If you missed the initial post you’ll want to read it first for context. 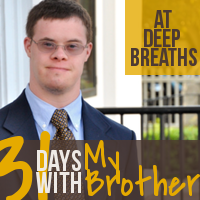 My mom woke up (the next day) and immediately remembered the events of the previous night. She cried every time she thought of Brian.  The only way she could handle her emotions was to think only in the present and not try to project what life might be like in the future.  There were so many unknowns; so much more than there are today.

“The doctor came in and asked how I was doing.  I told him I thought Brian was beautiful.”

My maternal grandparents came that afternoon to see Brian and then my parents took them in the same room where they had been told about Brian’s diagnosis.  My dad asked if they had heard of Down Syndrome…they didn’t seem to know what it was.  My parents relayed all that the doctor had told them.  They cried.  My grandmother told my mom (her daughter) that they must be special to have such a boy.  They agreed not to say anything to people until they found out the results of the blood tests in three weeks.

Later on my parents’ pastor came and saw my mom (my dad had tearfully shared the news with he and his wife) and opened his bible to John 9:1-3:

“And as He (Jesus) passed by, He saw a man blind from birth.  And His disciples asked Him, saying, ‘Rabbi, who sinned, this man or his parents, that he should be born blind?’  Jesus answered, ‘It was neither that this man sinned, nor his parents; but it was in order that the works of God might be displayed in him.'”

What an encouragement this was to my mom as was this verse from her friend Ruann from Psalm 18:28-31, “For Thou dost light my lamp; the Lord my God illumines my darkness.  For by Thee I can run upon a troop; and by my God I can leap over a wall.  As for God, His way is blameless; the word of the Lord is tried; He is a shield to all who take refuge in Him.  For who is God, but the Lord?  And who is a rock, expect our God?”

That evening two friends came to visit and my mom remembers thinking how nice is was to have them believe Brian was a normal baby.

Before leaving the hospital my mom asked what the note said that the nurse (who attended to Brian in the delivery room) had passed to the doctor. She was told it said, “FLK” (an abbreviation for “funny-looking-kid”); an indicator that something was wrong.

There is no way my parents could have known what was in store…great joy and great trial all mixed together (surgeries, moves, schooling, successes and setbacks).  They took one day at a time, relied on the Lord for strength, and loved their son.

I wish at this time my parents could have seen a picture like this and known it was going to be all right. 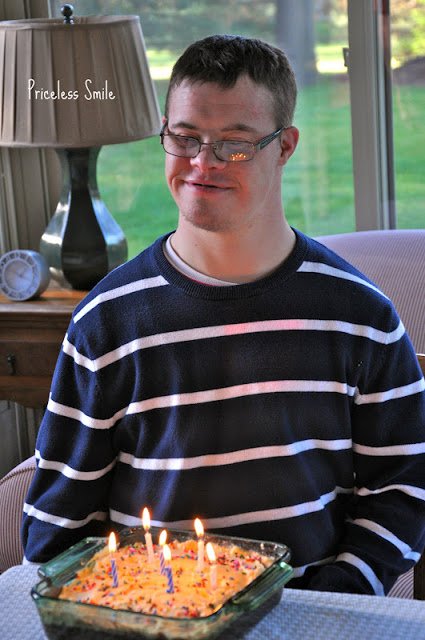 But even in the midst of the really hard, God is near, seemingly closer than usual.  When you are not sure where to turn, Immanuel (God with us), is able to uphold you and somehow provide what you need in your darkness.

What are you in need of today?  Praying you go to God’s Word and be comforted by the power of His love and hope for you; it is indeed wide and very deep.