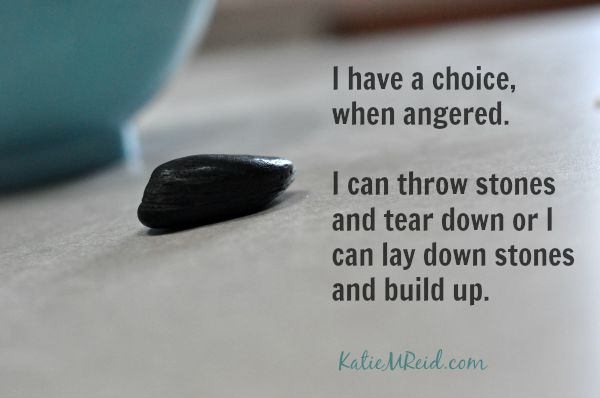 My emotions are larger than life.

I feel deeply. I shout with joy on the mountain tops and wallow deeply in the valleys.

I have sympathy pains when I hear that others are hurt. My empathy is both a blessing and a burden as I try to be everything to everyone—and end up depleted and defeated.

I ride the waves of my feelings and let them lead me into unsafe waters.

Sometimes my emotions capsize me upon the shores of sin.

My husband and father-in-law were chopping wood at our house this past weekend. In the heat of the day they were sweating as the whir of the chainsaw filled the air.

Soon it was time to feed the hungry workers. As the cool air from the fridge poured out I realized I needed to get creative with lunch—there wasn’t a whole lot to work with. I whipped up a healthy salad and tried to beef it up with veggies and meat. I was feeling pretty good about what I produced with the options that I had on hand.

My hubby is a gracious man but, without saying much, I could tell that he was not happy about the salad—after working up an appetite with all that manual labor in the backyard.

I can see his point now, but I didn’t then. I felt like he was being ungrateful so, as he walked out of the room and down the hall, I threw a rock at our dresser in my anger.

My emotions rose up and demanded a physical response to the depth of aggravation that I was feeling.

I haven’t done this sort of thing for a long time. On one hand the release of throwing something made me feel better—for only a second. But, I was equally scared by the level of disdain that overtook me, over a bowl of spinach salad tossed with pepper-jack cheese, corn and pinto beans.

My anger cooled as I sweated, on a run, under the noonday sun.

I love my husband dearly. He does so much to serve our family and care for us. Why did I react so strongly over something so small? 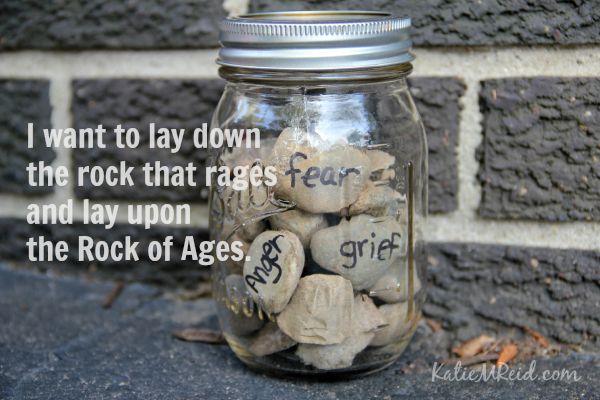 And then my mind flashed-back to a similar incident that took place a long time ago. There was quite possibly a rock thrown, as Cain rose up and killed his brother, Abel, because of his disdain. Abel had offered his best to the Lord, and Cain had presented some fruit of the ground (or some spinach salad, perhaps?). At the altar, or table of sacrifice, is where the anger started and it soon destroyed.

But it didn’t have to.

Then the Lord said to Cain, “Why are you angry? And why has your countenance fallen? If you do well, will not your countenance be lifted up? And if you do not do well, sin is crouching at the door; and its desire is for you, but you must master it.” –Genesis 4:6-7, NASB

Do you see it? Cain had a choice. Even though he was angry he could choose to do well. Or he could choose to not do well and the sin—that was crouching at the door, ready to pounce and overtake him—could first rule him, then ruin him.

God told him, “…but you must master it.”

We have the same choice.

I chose wrong. I chose to let my emotions take over and flung a rock in hate. Thankfully, I threw it at a beat-up dresser. But, the sin was just as present as if I had slammed it upon the head of my kin.

I want to lay down the rock that rages and lay upon the Rock of Ages.

I need to be brought back—away from sinking sand and onto the Rock that is steady.

I have let my feelings determine what is true. My perspective is often skewed as I rely on it to guide my steps.

I have been out of balance more than I care to admit because I let my feelings topple me over in a heap of hormones.

I need an adjustment—to be realigned so that I can stand up straight. I have been living under the weight of heavy emotions and have neglected crucial weight-lifting exercises.

But it’s time to get into shape.

Be angry and do not sin; do not let the sun go down on your anger, and give no opportunity to the devil.” –Ephesians 4:26-27

“The wise woman builds her house, but with her own hands the foolish one tears hers down.” -Proverbs 14:1

When angered we can throw stones and tear down or we can lay down stones and build up. With God’s help, let’s choose to build today.

P.S. Let’s continue the conversation about dealing with our feelings over at Jolene Underwood’s place as I guest post there today.

P.P.S Linking up with Kelly Balarie for the #RaRaLinkup and Holly Barrett for #TestimonyTuesday.