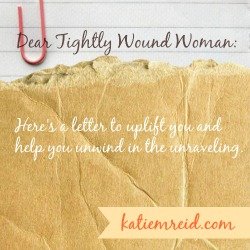 Sometimes finishing well looks different than you think it does.

Finishing well has more to do with your character than your time, status or audience.

Finishing well might mean that someone carries you across the finish line when you don’t have anything left to give.

Finishing well might entail helping someone else break through the tape at the end of the race.

You don’t have to be the best, look the best, or feel the best to be a champion in My Book.

You might cross the finish line broken and bruised—like I did—but holding a victory that cannot be taken and does not spoil or fade (see 1 Peter 1:3-9).

Sometimes finishing well is getting last place, just showing up, trying again and not giving up.

My economy is so different than yours. I value the weak. I pass out awards to the banged-up. I fill up the empty. I lay down my life instead of exerting entitlement.

Bow instead of bulldoze.

Dance instead of despair.

Give instead of hoard.

Listen instead of sounding off.

Stoop instead of strut.

Pick others up instead of sprinting ahead.

Don’t give up. I go with You. I am for you. You can trust me to be strong in your weakness.

That is why, for Christ’s sake, I delight in weaknesses, in insults, in hardships, in persecutions, in difficulties. For when I am weak, then I am strong.” –2 Corinthians 12:10

For more encouragement about being a finisher, view yesterday’s #MondayMessage video.

If you’re new around here then you might not know that each month you’ll receive a special love letter to help you unwind in His Presence. These letters (on the first Tuesday of each month) are written especially to the tightly wound woman who needs to be reminded that she is loved, seen and not alone.

In case you missed last month’s letter, you can read it (and listen to it being read) below:

P.S. Join the #RaRaLinkup over on Kelly Balarie’s Purposeful Faith blog. I’m linking up over there with the rest of the cheer team as we uplift His name and encourage one another.

Previous Post: « Blindsided to See Clearly by Robyn Dykstra (& The Widow Wore Pink Book Review)
Next Post: Trust Is Required If You Want To Be Led »