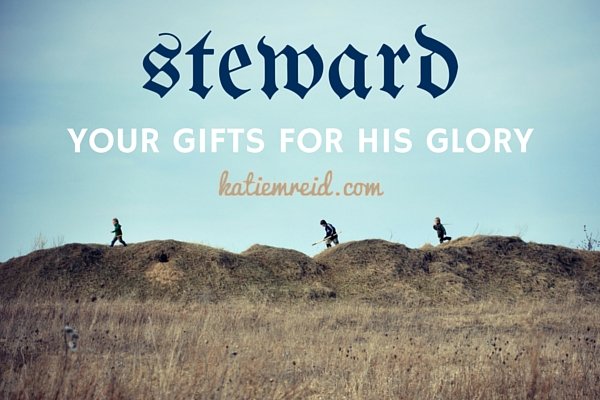 Our friend showed my husband and I around 160 acres. For fifteen years our friend had worked to develop the land in hopes of turning it into a Christian camp, in memory of his first wife. He felt the time had come to have someone else manage the property and get the camp off and running.

Adam and I had been in Christian camping for over eight years at that point but we had never started a camp from the ground up. We were honored to be given this golden opportunity but also overwhelmed by the magnitude of the project.

We didn’t own the land but had been asked to manage it. Our job was to take care of something on behalf of another. We decided to call ourselves the stewards of the property.

However, after a year and a half we handed the task back over to the land owner. We had dreamed big, we had gathered information, but we felt like we hit a brick wall in going forward with developing the camp.

It was hard to let go of the vision we had for the land, but it was also a relief to be released from the huge undertaking of starting a non-profit from scratch.

Life doesn’t always turn out like we expect it will. There are disappointments, surprises, twists and turns.

We are stewards but He owns it all. We are managers but He is the Boss.

As each one has received a special gift, employ it in serving one another as good stewards of the manifold grace of God. -1 Peter 4:10, NASB

Sometimes, when we really want to see something happen, we forget that God is ultimately in charge of the results. And sometimes His plan looks much different than we expected or hoped.

Join me over at Kelly Balarie’s blog, Purposeful Faith, as we continue this discussion of Releasing Results to the Righteous One.

Previous Post: « Interview with Nicki Koziarz (Author of 5 Habits of a Woman Who Doesn’t Quit)
Next Post: Has Life Thrown You a Curve Ball? (#RaRa Linkup) »